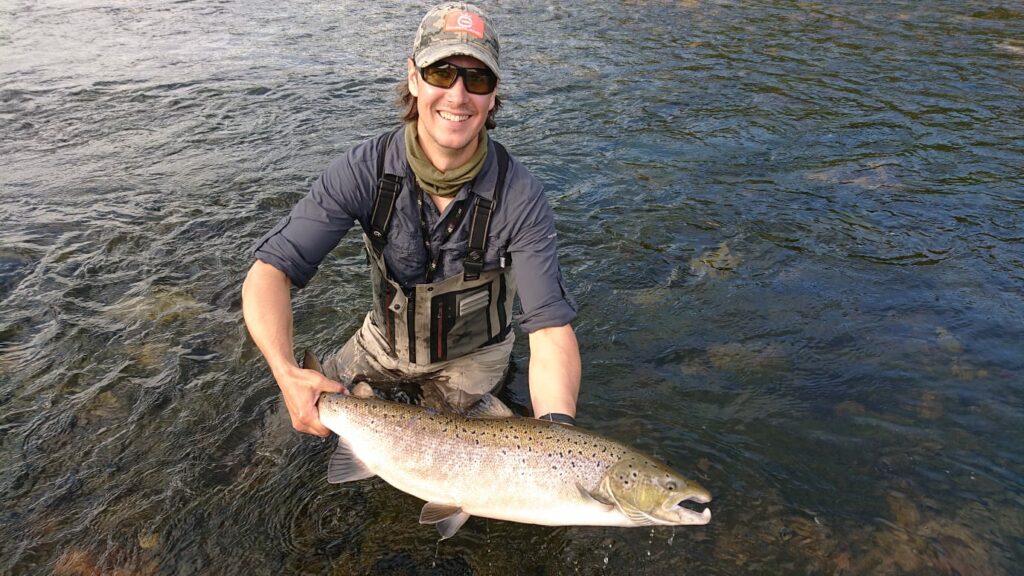 About 25 years ago, then 15 year-old Santeri Kinnunen managed to somehow sway his parents into letting him head to Northern Norway with friends from his local fly fishing club. On this first trip he ended up losing his heart to Finnmark and salmon fishing while covering legendary rivers like Lakselva, Repparfjordelva, and, if memory serves, also parts of Skaidielva. He has returned every summer since, touring different rivers in the region and lately focusing on less known gems that require more of a hike.

Santeri is best known as an extremely successful competitive angler – which might seem worlds apart from the traditional ethos of salmon fishing. In a way it is, but it also brings an interesting twist to his approach. “Contrary to competitions, my salmon fishing mindset is focused on just enjoying the moment and being present at the river. It is more about building a campfire and sitting by it speculating my next move, than building pressure for filling a scorecard. Then again, you can fish salmon using basically the exact same techniques as in competitive fly fishing.”

As you can tell, having fun is the essence of salmon fishing for Santeri. Therefore he also insisted that this article should focus on how to maximize your enjoyment instead of what is the best way of approaching salmon fishing in the context of Finnmark. “You can catch salmon effectively with totally different techniques, gear and flies on the same rivers. There’s no right and wrong apart from the river fishing rules that need to be respected. Hence finding a philosophy that you enjoy is key,” he explains.

So here you go, the highly generalized schools of thought to salmon fishing according to Santeri – and his Northern Norway best practices for each of them!

The mystified essence of salmon fishing can be captured in a double-handed rod performing an aesthetically perfect spey cast that sends a Green Highlander through the air. This is both effective and something many, if not most salmon anglers consider as the most enjoyable way to chase silver. Casting is a major part of the experience and fly selections honor the hundreds of years of fly tying tradition.

“You’ll see especially many of the locals opting for a, say 12,5’ – 14’, double handed rod with a 0.35-0.40mm leader about 1,5 times the rod length. Finnmark salmon rivers range mostly from medium to tiny, so longer rods aren’t really necessary,” Santeri says. “Pools are then covered downstream with 45 degree casts. So basically as traditional as you can get, and I guess for many this is the purest form of salmon fishing. I personally go for it when there isn’t enough back casting space to use a single-hander.”

You can of course use any fly you wish with a double-handed rod, but to exemplify this Purist philosophy Santeri has a few classics that he has found especially effective in the region. “Green Butt, Undertaker, Sarvijaakko. And of course one of my own favorites, Green Highlander!” he lists. “Another really effective fly type in Finnmark are white-winged patterns.” Junction Shrimp is a good example of the latter.

Hook fly sizes typically range from about #4-12 depending on season. “As usual, larger sizes for cold water during early summer and downsize as the season progresses.”

You can naturally apply the same approach on a lighter switch or single handed rod. Particularly switch rods are often a good option for Finnmark rivers that are on the small side, but often have limited back casting space. Likewise, all of the more modern fly patterns and techniques can just as well be used on a double hander. For the sake of painting the picture, let’s here characterize someone using them holding a 10-11’ switch rod.

“Some modern salmon flies like Frances and even Sunray Shadow produce mixed feelings. On one hand they are deadly effective, but also not completely kosher in the eyes of some purists. Actually, I recall cases where they have been banned altogether for being too effective,” Santeri describes slightly newer innovations that have already been mainstream for a while.

In fact, it’s perhaps even more about how these flies can be used than the patterns themselves that makes them work so well and creates controversy. “What separates them from the most traditional approach is that I prefer to fish them upstream at a 45 degree or so angle. This is one of the most effective methods of catching fish if the rules of the river don’t prohibit upstream casts.”

If you want to lean a bit more to the experimental side, Supertinseli, best known as a trout streamer, is a killer fly for upstream dead drifting. At Superflies we have it available also on a sturdy TMC 8089 hooks partly for the very reason that it is strong enough to be misused for salmon. “It always pays off to observe what others are doing at the river, and not only other fly anglers. Spinner fishermen tend to also have great results, and if you consider the flashy spoons they often rely on, it’s no wonder that a shiny Supertinseli is so effective. It works best in sizes #2-6 during early season and #8-10 later on.”

Santeri’s personal favorite technique is dry fly fishing, which undoubtedly has an unrivaled adrenaline factor. Witnessing each take and blowing up surfaces are the stuff that makes your heart miss a few beats. “If the conditions allow, I’ll always start off with dry flies. Only if first going through the pool with a fly doesn’t produce results I’ll switch to a small wet fly and then maybe tie on a Sunray Shadow.” The typical dry fly enthusiast equips themselves with a single handed fly rod, but the contents of their fly box may vary greatly depending on season and preferences.

“Bombers and especially their Finnish equivalent Pompero are the go-to patterns throughout the season. I’ve seen locals catch fish using downright huge dries early in the season, meaning up to 10 cm in length. My first choice would be a grey Pompero of closer to 5cm in length,” Santeri says. Later in the season small riffling hitch tubes come into the picture – they are both fun and effective in low water conditions.

According to Santeri, dry flies are at their best in sunny weather, especially when dead drifted upstream: “Upstream casts and dead drifts are usually the recipe for success, with the addition of skating the fly with a few short bursts when it approaches a sighted fish. By the way, it often takes multiple attempts before a salmon loses its cool and goes after the dry fly, so sometimes it pays off to be persistent and keep on ‘knocking on the door’ until you get an answer.”

A less orthodox approach is again digging for your trout streamer box and tying on a foam-backed Surffilauta. Ironically, the smallest sizes are best for salmon, whereas Surffilauta is typically used in large, up to 20cm sizes for trout. “Surffilauta is a fun and versatile fly to fish. You can try different techniques, like an upstream cast and stripping as fast as you can, dead drifting or anything in between.”

And then there is the eyebrow-raising department for those who prefer to try something different – or simply want to catch a lot of fish. Again, remember to check the rules of the river you are fishing to see if these flies and techniques are permitted.

Let’s begin by diving directly to the deep end. Another observation you’ll make at most rivers is locals casting something with spinners that is definitely not a lure. But a hookful of worms. “Markfiske is actually an effective, traditional technique popular in Norway. This in mind, I think it is only natural that Squirmy Wormies work as an Atlantic salmon fly. Pink, red or tan – either on a floating fly line or at the end of a French leader.”

Speaking of French leaders, we are approaching the techniques that have most been inspired by competitive fly fishing. “A key difference is in the gear, which needs to be sturdier. I’d recommend a #6-7 weight nymph rod, 0.40mm french leader setup and a reel with a quality drag,” Santeri compares and adds that he personally prefers these techniques especially in deep canyon pools and small rivers. “The same universal nymphs work for salmon that are effective in general. Black Woolly Buggers and bead head nymphs like #12 or so Orange Tags and Prince Nymphs are among the best.”

When facing a larger river, Santeri has another trick up his sleeve. “Dry-droppers are great for both quickly scanning through wider pools or for sight casting to late season fish. I use a dry fly like Pompero or Surffilauta that floats well, and tie on a nymph as a dropper fly,” reveals Santeri. “Another little tip is to tie the dropper on the bend of the hook. Believe it or not, this actually improves the presentation of many dry flies. I use a long leader, at least 1.5 times the rod length with a 0.30mm dropper.”

Choosing your philosophy isn’t of course as black and white as presented here – most salmon anglers use different approaches for different situations, rivers and phases of the season. The morale of the story is that multiple styles work on each and every occasion if executed well. “It is easy to think you need to follow a certain style to fish salmon. I believe that finding the ones you personally enjoy most not only make it more fun, but effective,” Santeri explains.

Regardless of your approach, there are at least two universal truths Santeri thinks should be kept in mind. “Especially when fishing public beats, getting to fish a rested pool first is always a huge advantage. The more pressure the pool has, the more challenging it gets to entice a strike with any technique. Another piece of wisdom is to watch what others are doing – and try the exact opposite especially if they aren’t really catching fish.”

Superflies is a proud sponsor of Fly Fishing Team Finland. The guys have custom designed a series of their favorite nymphs, and we’re making sure their fly boxes stay full on their way to FIPS-Mouche World Fly Fishing Championships and other competitions. You also have an opportunity to fish with the same flies as the pros!

Login first to save cart
Back