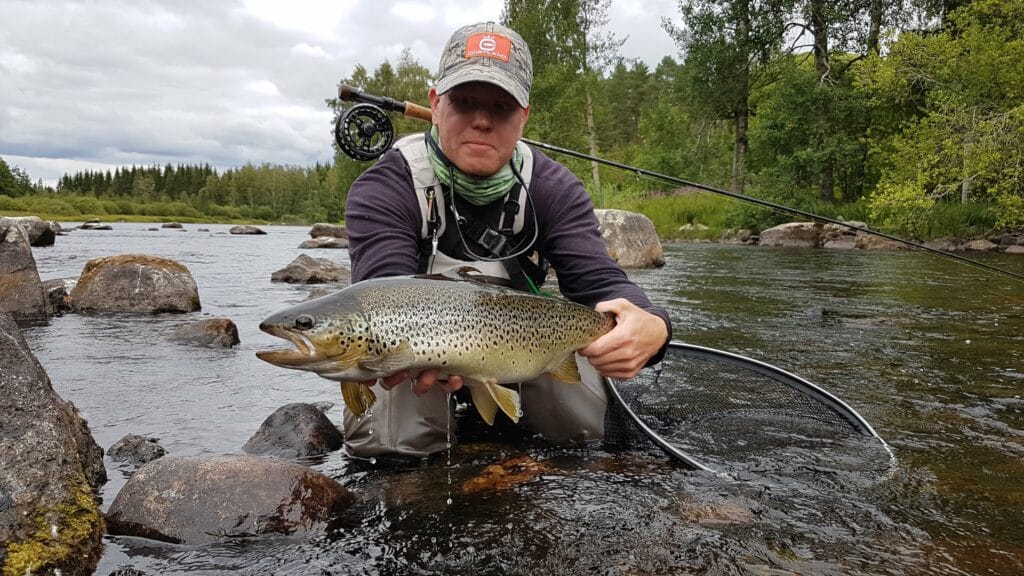 You might think that a seasoned competition angler’s fly box is hoarded with a variety of different models. Completely different flies for different countries, rivers, hatches, conditions, techniques and seasons… At least we did, when we first contacted Fly Fishing Team Finland on whether they would like to have a custom fly series of their favorite nymphs produced. It was a slight surprise that actually a major part of their tight-line fishing techniques evolved around only two (2!) patterns.

The two (or three or five) Superflies

Jyrki Hiltunen has successfully toured international fly fishing competitions for over a decade, won a silver medal in the 2018 World Championships and certainly mastered modern tight line techniques. Thousands of hours spent on the water have narrowed his fly choices to the ones he finds most effective: “I think it’s intriguing that no matter where in the world I’ve fished, the same patterns keep producing. Whether it’s Tasmania, Southern Europe or the Nordics. I know from experience that in most conditions these patterns work, so instead of varying different fly models, I emphasize variation in bead color, weight and size.”

The flies in question are jig-style tungsten beadheads known as Orange Tag and Red Rib Killer, including a pink ribbed of the latter – Pink Rib Killer. But what makes them so special?

Both have effective features such as UV materials, a lively CDC hackle and something to consider as a hot spot. But according to Jyrki, really the key is that instead of trying to be realistic replicas of a certain hatch, they are generic enough to imitate almost anything effectively. That’s also probably the reason why they work anywhere around the world, in rivers with completely different aquatic fauna.

“Bead colors and fly size are then the features I try to optimize for each situation. Sometimes only changing from a light metallic pink bead to a copper one, or vice versa, can have a huge difference,” Jyrki explains the importance of having diversity in his arsenal. He often fishes the same pool multiple times, moving upstream and changing bead colors after the first round.

While bead color is about attracting the fish, weight has more to do with maximizing time in the strike zone.

“Having different bead weights is important in order to adjust to different kinds of pockets and water depths. In the tightest pockets, where the area I want to fish might be only one meter long, the flies need to sink immediately to the fishing depth. There you might for instance select a 3.8 mm tungsten bead. In shallower water or when you have more time to sink the fly, you can rely on a lighter bead, like 3.0 mm or even 2.5 mm,” he continues. “Naturally also the strength of the current and activity of the fish affects your choice of bead size.”

Finally, there’s the size of the fly. Jyrki’s general rule of thumb is that you can use larger flies when there is less fishing pressure. The more the fish are exposed to flies and anglers, the more you need to size down. “You can see this clearly during the course of the fishing season in my home waters in Central Finland, where the fly size needs to go down towards August. Fishing competitions exemplify that same development packed into a matter of days – the fish become much pickier towards the end of the competition after seeing countless flies drift past.”

Grayling fishing in Northern Finland is another good example of the former. “When fishing a pool for the first time, the fish might be hitting the flies on every drift. After going through the pool once, it gets much more challenging and you need to put some thought into your fly selection.”

At this point someone might be wondering how come a competitive angler reveals the most sacred of all – his trusted fly patterns. Then again, just tying on an Orange Tag won’t make you a trout whisperer. It’s how you use them that makes the difference.

A few words about techniques

Jyrki’s standard setup is a rig of two nymphs about 50 cm apart on a French leader, which he dead drifts upstream. Most often he uses 0.14-0.16 mm diameter tippet, but this can vary in both directions depending on conditions and how shy the fish are.

So is it really just Orange Tags and Red Rib Killers he ties on to his rig? Although these two patterns are the bread and butter of his fly box, he does also complement with other flies. “For example, during the earlier part of the season in Central Finland, fish seem to be focused on larva. That means I usually put on a Hydro Larva as my point fly and a Red Rib Killer as my dropper fly.” So there is some local flavor included after all!

During the summer, he mostly fishes his local waters with a #14 Orange Tag as the point fly, again paired with a #14 Red or Pink Rib Killer. If the flies need to be downsized, he’ll use the same ones in size #16 or replace one of them with a Perdigon nymph. When serving to highly pressured fish, Jyrki might also change from a pure dead drift to actively “jigging” the flies by twitching his rod tip. But again, it’s often the usual suspects he jigs: the Orange Tag and Red Rib Killer.

“Even during events like massive caddis hatches, my Red Rib Killer and Hydro Larva almost always pass as a caddis pupa. Sometimes, but seldom, when the fish are really concentrating on feeding from the surface, you might need to result to matching the hatch more specifically. Those situations might call for a Parachute Caddis or Extended Body dry fly.”

Dry flies on a french leader?

Tight line dry droppers are in fact one of Jyrki’s favorite techniques. Fishing with a tungsten bead nymph paired with a dry fly dropper is both effective and can offer takes you will never experience fishing with a fly line. “In this kind of a setup, you keep constant contact with the point fly – often an Orange Tag. That means that the dry fly on the dropper is at times floating on the surface, but often also hanging in mid-air. It’s quite something to witness strikes where trout literally jump right out of the water to get your fly from way above the surface!”

Another reason for using dry droppers is that it allows to effectively cover places that would be unfishable with traditional fly line techniques. “Some of the best hot spots of a river are right at the edges of the fastest current. You can of course easily fish the edge closer to you with a fly line. But try casting across the main current to the far side and your fly line will quickly start to drag the fly even with constant mending,” Jyrki explains.

“With a tight-line technique, you keep contact with the point fly, which also ensures a tight line that stays out of the fast current. You’re able to do perfect drifts on the far-side edge of the fast and calm current.”

The “Designed by Fly Fishing Team Finland” series we currently carry consists of:

Superflies is a proud sponsor of Fly Fishing Team Finland. The guys have custom designed a series of their favorite nymphs, and we’re making sure their fly boxes stay full on their way to FIPS-Mouche World Fly Fishing Championships and other competitions. You also have an opportunity to fish with the same flies as the pros!