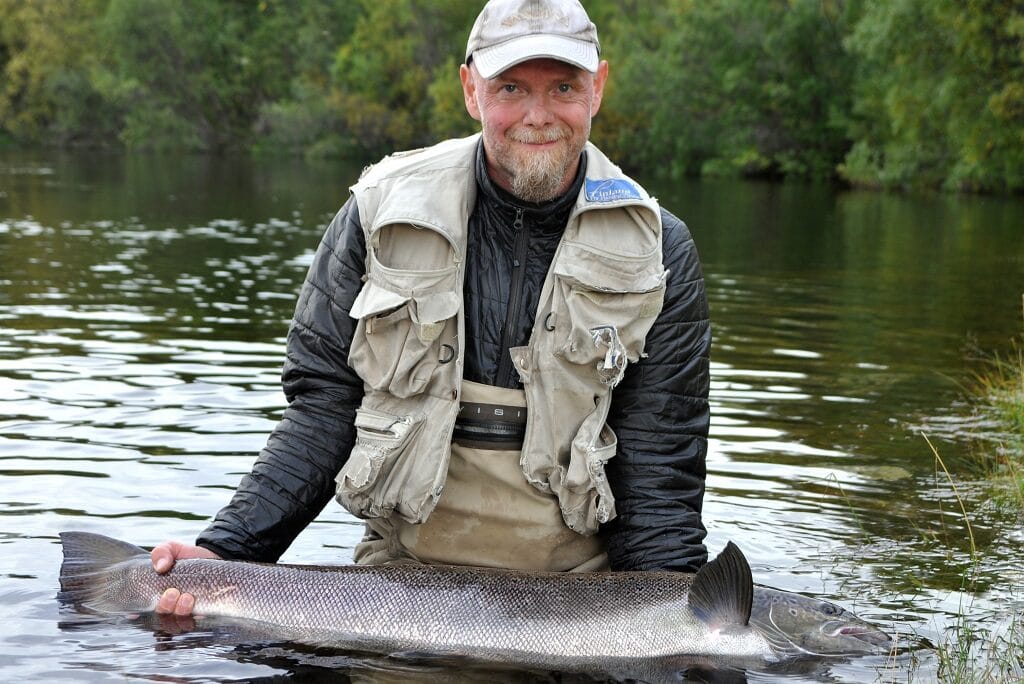 Superflies disclaimer: Mika did not get paid for writing this article. We initially sent him a bunch of samples to test, but the fly orders he refers to in this article were made as a regular paying customer.

I am a fly fisherman. I am not a fly caster nor am I a fly tyer. I don’t get any additional kicks if I hook a good fish with my own fly. I could say almost vice versa. If I hook a fish with a fly, which is tied by my friend, it makes me even happier. I can call him and tell the story of the big fish, which I was able to get thanks to his fly. Shared happiness is the best happiness. And if I land a beautiful fish with a fly, which I have selected from some fly tackle shop or from a website, I am equally happy, because I have been skillful (or lucky) enough to select the right fly from tens or even hundreds available.

I can cast long enough and accurate enough, but I am not spending my time trying to improve my casting skills. (I should, I can hear my skillful friends saying while reading this piece). Likewise, I can tie any fly model when I have the recipe, tools, and the needed materials. (Again, my friends might start talking about those big heads I end up having in my salmon flies.) I have even participated once in the national finals in fly-tying and before that I spent considerable amount of time refining my skills in some special techniques. No medals there, but I was still able to successfully complete all the models and defeated some serious fly-tyers. I have probably a cubic meter worth of fly tying material in some messy bags and sacks hidden into a large cabin. Most of the stuff is totally unorganized and only the materials for some of my favorite flies can be located without a half-an-hour long search and digging operation.

My main problem is that I don’t really like fly tying, but I absolutely love fly fishing. During my earlier active years, when I was fishing and guiding more than 100 days per year, while at the same still having a “honest” day job, I was tying flies for my customers and for my own fishing trips. My busy schedule led to tying the needed flies just prior to the trips, usually during the last nights. Not a good start for any fishing trip.

Probably for the above reasons, and for my inherent desire to collect flies, I have been buying flies from local fly shops, guides, professional fly tiers and from my more skillful friends over 20 years. During the FIPS-MOUCHE World Champs, where I was a competitor in 1997-1999 and the captain in 2017-2010 in the Finnish Team, my normal activity included always buying dozens of local “killer” flies for the competitions. Regardless of those acquisitions, it was funny to see that after the competition recap sessions with other teams, revealed that the same types of flies were used by all teams basically in all competitions.

Without going into details, one could say that CDC is a magic material and that small-sized bead-headed nymphs with a bright orange collar, seem to be working almost everywhere. F-flies and PT and GRHE nymphs were working like a charm. Occasionally, you obviously needed some local flies like Chernobyl Ants on Snake River (1997), but in general old favorites, sometimes with minor twists, were doing the trick in all my games in USA, Poland, Australia, Finland, New Zealand, Scotland and again in Poland.

When I started to ponder, what to write to this piece, I started to recollect what kind of flies I was using when hooking some of my most memorable fish. Being first and foremost a salmon fisherman, I concluded that I have got most of my biggest salmon with flies I have either got as present or I have bought. My biggest dry fly salmon was caught with a Pompero given to me by my former competition teammate and another large salmon was caught with a small Thunder & Lightning tied by a friend, clubmate and one of the best fly tyer in the world as part of my order and so on and so worth.

One fish worth mention is a beautiful salmon from the Bolvero Pool, Sautso area, Alta last summer. I caught it with a Surffilauta dry fly (foam-based everfloater) given to me by one of my fly fishing brothers as a gift for me 50 years birthday. My largest seatrout, from Rio Grande and Rio Gallegos, were all caught with ugly looking flies, like Yuk-Bugs and EMBs, tied by my guides or bought from international fly shops. My biggest steelheads from Sopochnaya River, Kamchatka Peninsula, Russia in 2001 were all caught with Bjorn’s Bleeding Prawn flies, which I got from an American fly tour organizer and ex-guide on the bank of the river.

On the salty side, my biggest tarpon, trevallies, bonefish, tuna, sailfish, snapper, grouper etc. are all caught with either commercially tied flies or with flies provided by the guides. Even my only proper hook-up with a permit in Jardines de la Reina, Cuba was due to commercially tied Avalon Fly. Unfortunately, the fish broke the hook and left me the memorabilia, which I would not like to own at all. Likewise, losing my first large GT on the southern flats of the Maldives due to hook breakage of Purple Brush Fly, produced one of those rub-it-in things for me.

Those two occasions underline to need to do some research before committing to certain supplier. Guides and tackle shops are easy cases, because you will see their flies, but ordering from online shops has some obvious challenges, because you can’t hold the flies in your hands. When ordering from online sites, there are naturally few points you must focus on. Pictures on the sites are naturally stunning but sometimes the flies in those photos have nothing to do with the flies you find when you open the postal package. To prevent that from happening, there are few things you can do.

The normal things, like checking what the company tells you about the hooks they use, and maybe finding answers to some questions about the materials and labor force should be done. However, the best way to get an idea of the quality and service of certain company, is naturally to make a test order. Select a set of your favorite models, preferably from different categories, and order minimum two of each.  You will find how the company is working and how good and consistent flies they produce.

From standard models to custom specialties

I have found a couple of good fly companies from USA and UK, which I have been using during the last 20 years, especially when traveling to more exotic world-class destinations. Those companies were selling all-time favorites and in most of the cases, those flies have been serving their purpose – the fish were biting. I still use some of those companies when I am going to those once-in-the-lifetime trips.  However, if I have been fishing certain destinations for several years, I usually have a pretty good idea of the flies I would like to have in my fly boxes. Unfortunately, having been fishing mostly with my friends, we end up using our own flies, which might be heavy modifications from some classical models, rarely used forgotten models or totally new ones. And when you start looking for those, you don’t find them from any commercial sites. You either tie them yourself or you order them from your friends.

For those reasons, when I heard that my old friend Jasper was starting a fly-tying company with some other Finnish guys, I was extremely happy. Having fished together with Jasper all over the world, I knew that it could only be a great success. Not only is he an awesome angler, but he has a keen eye for details, and he hates anything less than perfect. He told me that he been scouting potential fly-tying factories, while being on the eastern fly-tying factory area on a working trip. After hearing his 30-minute-long monologue about how important it was to see how well the selected factory operates and how it takes care of its staff, I knew that the quality of the flies would be first-class.

Summer 2021 was a weird one. Well at least for me, as I wanted to fish Norway during the summer months. Pandemic caused some issues when crossing the Finland-Norway border and required once a quarantine period and some extra driving. Luckily, I was able to cross the border every time, and could enjoy my annual salmon fishing weeks in Finnmark. It was not so good salmon season, but I was happy to hook some decent fish from several rivers. I ended my season with a nearly two-weeks trip, which started with some last days of salmon season and continued well into to the seatrout season. To be well prepared for both, I ordered a large bunch of flies from Superflies.

Some flies were my old favorites, which are also among Jasper’s favorites and thus available commercially. Don’t want to list all of them, but just want to name one newbie to me, a small double called Kultasirppi. Never seen that before, but there was something about that small golden/brown/black fly. It was my best producing salmon fly for those last days of the season on a slightly brown-tinted big salmon river up North.  There were some other jewels as well, but I want to save those for further testing, before naming them. Not that I would believe a second, that somebody would use those models, just because I would have listed those. All the flies where just like they should be, like they would be if they were taken from Jasper’s own box. In general, they were much better-looking flies than I could ever tie myself.

Salmon season in Norway is just around the corner and I am starting to fill my boxes. I tie some of my absolute favorites, mainly dry flies, but otherwise I buy them from Superfies. I have to say that those flies are absolutely stunning. I have already received two additional orders and I am planning for the third order. I need still some dries and small doubles for salmon.

The only mistake I have found in Superflies’ extensive fly model repertoire, was ironically related to the one and only fly model I can call my own: Musta Kostaja. This black and silver marabou streamer was for many years my go-to fly, while fishing and guiding for large brown trout and salmon. Especially productive it was on Varzina River / Kola Peninsula. I came up this fly model in 1992-1993 and I never leave home for large trout/salmon fishing without few specimens in my box. I have already provided Jasper a picture and a detailed recipe of that fly. Let’s hope that the next batch will be closer to the original. If it is, I will order those from Superflies, because I hate finding small pieces of those fluffy marabou feathers everywhere days after my tying sessions. I am sure that my family will thank Superflies as well.

Login first to save cart
Takaisin